DAX – If only I Could Avoid IF

There are several articles mentioning performance problems with IF formula. But until you hit an issue you would not believe how big such an impact could be. I would like to spell out several examples from my performance tuning exercise from last week. I’ll explain only the first example in more detail. Take the others more as an inspiration.

IF method Use Cases

Recently I made some SSAS Tabular based solution and implemented some DAX Measures which would have quite complicated logic for underwriting reporting. Measures for calculating with averages, ratios, medians, development factors (product of values) etc. As the customer wanted to make the solution robust, there was a lot of logic implemented into calculations which would assure a certain behavior of the measure in special situations. For instance, for one measure for current reporting year the value should be always 100%, then you would go from this anchor into the past and subtract some value from the previous year from this number. I learned a lot during the developing of this solution about what the context means for DAX and how to manipulate it. Nevertheless, I needed to make some change to this solution recently which complicated the logic of the measures even more. And then suddenly the solution stopped performing. The root of most problems was using IF method on various places. I’ll show several examples and a workaround to avoid IF method and replace it with something else.

For calculating Development Factor values in years, we need to avoid empty values. If there was an empty value, we would replace it with 1.

In this case, we can rewrite the measure because Blank Value handling during math calculations – comprehensive description here. So why is the second formula performing better? If I would simplify my outcome of studying exec plan:

It might be more clear if you see two queries going into Storage Engine:

SE Query 1 (coming from IF condition)

SE Query 2 (coming from IF result)

For second version of the measure – second SE Query is issued twice.

Measure 2 – Avoiding IF as such

In this measure, I needed to replace empty values of my [Lost Ratio Base] calculation by 0. But I needed to do it only when other measure had a value. If there is empty measure [Premiums], [Lost Ratio] should stay empty as well.

First version of the measure (12 sec in master query):

The best approach is not having IF at all so if you can avoid it please avoid it. Again, logic of new query uses Blank Value handling during math calculations – comprehensive description here.

As I worked on 2014 SSAS, DAX did not yet support Median method, so I had to implement one of the workaround approaches which can be found around. I used one from Gerhard Brueckl.

As a helper for median, there is the following measure (7.5 sec in master query):

This approach just uses different math to get the same result. Only reason here is to avoid IF, result of the measures is the same and you will get much better performance.

You can see result of my tuning visually on following chart. 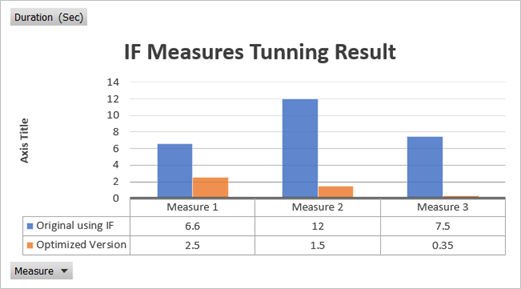 I did not propose definitive solution of performance problem around IF function. However, if you think carefully maybe you would find some way to write your DAX expression differently. As a payoff you can gain huge performance improvement. The point here is to rethink your query not just from DAX perspective but from logic which you use in the query as such.