Life of a variable in PowerShell

Recently, I was facing an issue that a variable had a different value than I expected. I was executing a script, let’s call it Script1, which was using a variable. Script1 was executing another script (let’s call it Script2). Script2 contained a variable with the same name. Once Script2 was done, the value in the variable from Script2 was still present in the variable of Script1. This short blog post will seek to unravel this mystery.

Preparation of a crime scene

Let’s start with the scene preparation. We are going to need two PowerShell scripts. These scripts are going to be stored in the same location.

We start with a code preparation for Script2. The script itself is very easy. It only has two commands:

Script1 will do almost the same as Script2 does. It assigns a value into the variable and then it executes Script2. The order of commands in Script1 is:

The scene is prepared. Now, we can execute Script1.ps1 stored in C:\Temp. When we look more closely at Script1, without any deeper knowledge of PowerShell, we could then expect that value in the variable $myBelovedVariable should be “Joyful”. Let’s execute  Script1.

If you did everything as is written above, then you’ve got an output as it is on the picture below. The variable in Script1 has the value “Craftsmen”. For some reason the value remains even after Script2 finished. 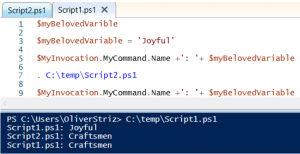 Oh wait. There is a dot on line 7 in the picture above. I’ll try to remove the dot and execute the script again. After execution, you can see in the picture below that our variable has value “Joyful”.

Final note that you should remember. When you dot source a script then all its variables and functions will persist when the script ends. If you do not remember this, then your scripts could work with unexpected value.